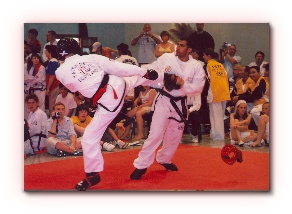 Everyone who went did very well with our very own Mr Purves winning three medals with the Scottish Male Team (Gold for power destruction, silver for sparring and bronze for patterns.)

Also, well done to Dougie who won gold for both patterns and sparring. It was also nice to see some familiar faces in the crowds in the shape of Chris and Stuart – thanks for all the support guys.