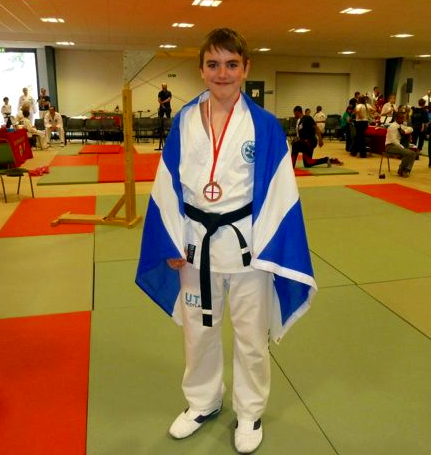 Congratulations to Lee Little from Intrepid East Calder, who recently attended his first competition as a Black Belt.  He attended the Heart of England Taekwondo Championships, and earned himself a bronze medal for sparring.  Well done Lee.

This is Lee’s story:

I went down to the Heart Of England competition on a coach with a bunch of other UTFS members and the atmosphere was great. Everyone was happy to be there and were telling stories of previous tournaments they had all been to, thankfully no singing was involved! When we finally made it to our hotel and after a late dinner we went straight to our rooms so we could get a good sleep for the early start the next day.

A short bus journey got us to the competition and there were three other main teams that I could see (Wales, Heart of England and Ireland) and then there were a few other English teams and one more Irish team that was quite small, again the atmosphere was great. The first group up (that the UTFS were part of) were the blackbelt female 15-17. After what felt like the rest of the tournament had finished, the male junior blackbelts were called up.

The pattern groups were; under 10’s, 11-13’s and 14-17’s. I unfortunately got put out on the first round as I had got confused over which pattern I was doing, then Scott Gowans and Ewan McKenna both got put out leaving no Scottish competetors in the black belt patterns 14-17 category. In the end it was an all-Ireland final.

Next came the sparring and the groups this time were; under 10’s 11-14’s and 14-17’s with several different weight categories within. I was in the 11-14’s lightweight(40-64kg) category and there was five of us. Ewan and I were the only two Scottish in the category. The first round was Ewan but he burst his opponents nose so he got put through quite quickly. I then fought and it was very close but my opponent won and at one point the paramedic suspected I had a cracked rib but I still continued. In the end Ewan got 1st and I got 3rd.

After that was power but I wasn’t taking part as my ribs still hurt too much hurt to move.

On the way home the bus driver didn’t stop at all (apart from a small fuel stop) until Carlisle so as you can imagine we were all pretty hungry but a KFC soon sorted that out. By the time we got back it was 1:30am so I was really tired but it was worth it as the tournament was really fun and I got my first international medal.