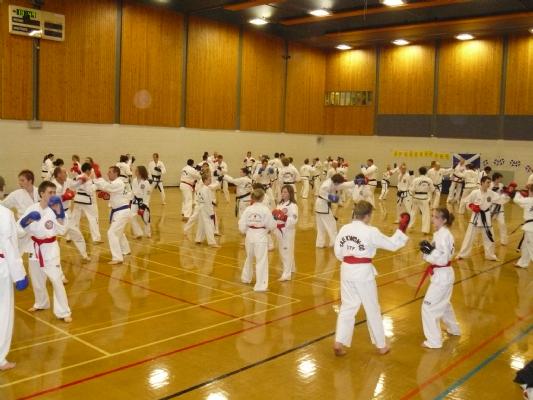 Master Maidana [VII] – (Argentina) accompanied by Master Dalton [VII] – (Ireland), Chairman of the ITF Expansion Committee and Mr. Fernando Perez [VI] – (President of ITF Spain) visited Scotland to conduct a sparring workshop for the students of the newly formed United Taekwondo Federation (Scotland). The workshop seminar took place at Grangemouth Sports Complex. Master Maidana is in huge demand at this time. In March alone he is scheduled to visit in Ireland, Wales, England, Spain and Canada.

Upon reaching the Dojang, Master Brown and his three guests were greeted by rapturous applause by over 120 students with over 60 black belts and many international instructors. The event was also supported by a number of Miss. Catherine Divine [V] – (Imperial Scotland) students. Master Brown [VII] – (President UTFS), proceeded to present his guests with commemorative plaques and this was followed by a warm introduction to our guests. 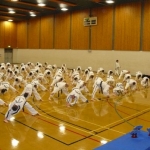 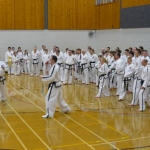 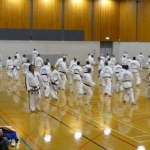 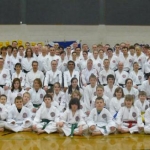 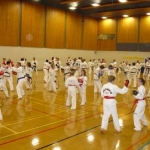 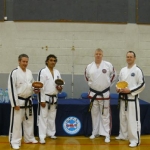 Master Dalton initiated the workshop with warm up and stretching, and after 20 minutes the Argentine Master took to the stage for what turned out to be an intense four hours of training. The session began with the explanation and practice of footwork and this was followed by the practical implementation of the categorized footwork with defensive and offensive techniques. Master Maidana’s teaching methods were always logical, structured and systematic and it resulted in an excellent learning environment for all. The students were highly motivated throughout and worked endlessly for the four hours, which seemed to fly by. Master Maidana demonstrated his techniques with exquisite beauty and was always demanding of the participants.

Master Dalton and Mr. Perez assisted throughout the seminar, demonstrating the power and speed that can be obtained while applying the techniques being practiced.

According to Mister Perez “Master Maidana is without doubt one of the eminent ITF instructors in the world, and his enthusiasm for teaching is boundless. We are very lucky to have such a man of high integrity and ability coming to Europe to help with the further development of the region.” Afterwards Master Maidana thanked Master Brown and Ms. Liz McKenna [V] – (UTFS National Secretary] for their fantastic organization and wonderful hospitality. He said “The standard of the participants was excellent and I think that Scotland will become a real force in next year’s world championships in Korea. I look forward to a special relationship with my new Scottish friends in the years ahead.”

Students (and instructors!) from both Inverkeithing and East Calder Intrepid clubs participated and enjoyed the event :

A big thank you to the Masters for their time and effort.