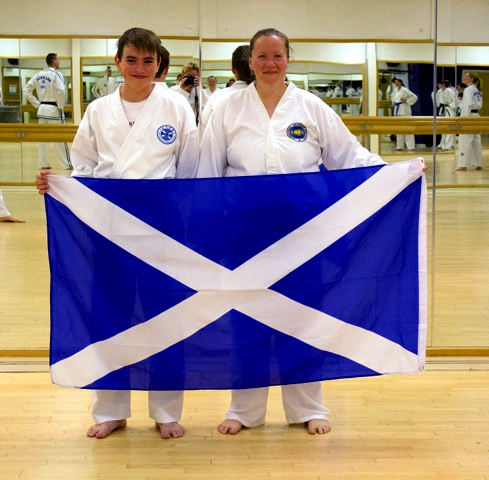 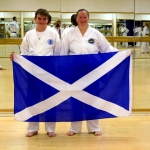 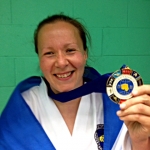 On 1st August 2013 Susan Dundas and Lee Little travelled to London to represent Intrepid Tae Kwon Do and the UTFS at the 1st Unified ITF World Championships. Several months of extra training and early morning Sunday training sessions had been completed in an attempt to prepare for the competition. Lee had just became a black belt in March 2013, so had worked really hard to learn 3 new black belt patterns, and make the leap from coloured belt to black belt sparring.

A long bus journey down was followed by the weigh in and registration before heading to the hotel. Friday morning saw the start of the tournament and everyone lined up for the opening ceremony. After that the competition started and we all headed off to our patterns group. Lee performed his two patterns well but was beaten by a more experienced competitor. Likewise for Susan who didn’t make it past the first round for patterns. The patterns were followed by a bit of waiting for most for their sparring groups to start.  Lee was up on the Friday in a very competitive and experienced group.  He was beaten in the first round, but performed well against a good competitor and showed great determination and spirit. The competition was stopped on the Friday night about 8.30pm, and everyone travelled back to their hotels.

On the Saturday, Susan was up in the veteran sparring category and was delighted to win gold.  The rest of the squad worked hard and there were a few individual medals and team medals for sparring, special and destruction.

The coloured belt squad arrived down on the Saturday and competed on the Sunday . Everyone then headed home on the Sunday afternoon.

The competition was a great experience and one which wouldn’t have been possible without the help received from Mr Scott with extra help in class for patterns and sparring;   Mr Purves’s extra training sessions;  and the squad training with Master Brown.  The sponsorship received both from Intrepid and the UTFS was also greatly appreciated and made the whole experience more viable.

Competitions aren’t for everyone but for both Susan and Lee, they are proving to be an enjoyable experience, allowing both to improve and compete at a higher level; and as seems to be the case at every competition they go to, it allows them to meet people from all over the World and make many new friends.  If you haven’t competed before its worth trying to see if you would like it … not everybody will win at competitions but it’s about your own personal journey. As is always the case with Tae Kwon Do.

Finally – a very big congratulations to Susan for securing a Gold at her first World Championships!!!