Saturday 26th September saw the first UTFS technical seminar of 2009. The event began on the Saturday at the Mariner Centre, and ran from 1pm until 5pm. 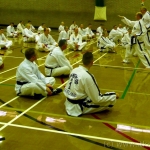 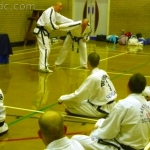 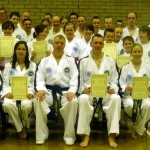 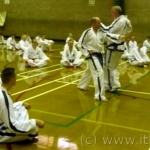 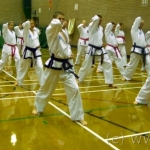 Master Brown (7th Degree) took the seminar throughout, updating the attendees with the latest techniques – displaying his vast Taekwon-do knowledge accumlated from his many years of training. 5th Degree patterns were covered first, with the 4th and 3rd degrees joining in for in-depth training on 3rd degree patterns. Time flew by and after the 3rd Degrees were dismissed, the 4th degrees then took the opportunity to really delve into their 4th degree pattern knowlege. Before long, this portion of the seminar was also over and the attendees went home to prepare for the next day.

Sunday 27th September saw the event continue at Bo’Ness Recreational Centre, starting at 9am, and finishing at 3pm, and saw the 3rd, 4th and 5th degrees joined by the 2nd degrees to cover 2nd degree patterns. 1st Degrees joined in later in the morning and Master Brown had everybody working hard for the rest of the day, covering the different types of motion and power generation.

After the patterns were covered, a bit of philosophy was discussed, an update of next year’s events and the day finished off with a great pad session.

Attendees from the Intrepid clubs were: