(21 Movements). Dan Gun is named after the Holy Dan-Gun, the legendary founder of Korea in the year 2333 BC.

The history of Dan-Gun 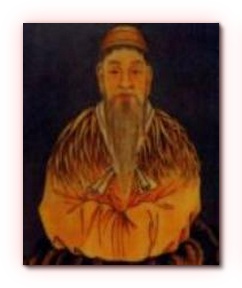 Dangun Wanggeom was the legendary founder of Gojoseon, the first kingdom of Korea, in present-day Liaoning, Manchuria, and the Korean Peninsula. He is said to be the grandson of the god of heaven, and to have founded the kingdom in 2333 BC. Although the term Dangun commonly refers to the founder, some believe it was a title used by all rulers of Gojoseon, and that Wanggeom was the proper name of the founder.

Dangun’s ancestry begins with his grandfather Hwanin, the “Lord of Heaven” (a name which also appears in Indian Buddhist texts). Hwanin had a son Hwanung who yearned to live on the earth among the valleys and the mountains. Hwanin permitted Hwanung and 3000 followers to descend onto Baekdu Mountain, then called Taebaek Mountain, where Hwanung founded Sinsi (“City of God”). Along with his ministers of clouds, rain, and wind, he instituted laws and moral codes and taught humans various arts, medicine, and agriculture.

A tiger and a bear prayed to Hwanung that they may become human. Upon hearing their prayers, Hwanung gave them 20 cloves of garlic and a bundle of mugwort, ordering them to eat only this sacred food and remain out of the sunlight for 100 days. The tiger gave up after about twenty days and left the cave. However, the bear remained and was transformed into a woman.

The bear-woman (Ungnyeo) was grateful and made offerings to Hwanung. However, she lacked a husband, and soon became sad and prayed beneath a Sindansu (“Divine Betula”) tree to be blessed with a child. Hwanung, moved by her prayers, took her for his wife and soon she gave birth to a son, who was named Dangun Wanggeom. 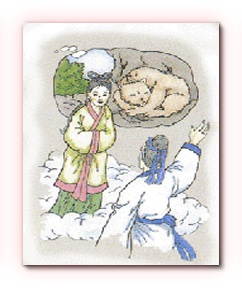 Dangun ascended to the throne, built the walled city of Pyongyang (present capital of North Korea), and called the kingdom Joseon. He then moved his capital to Asadal on Mount Baegak (or Mount Gunghol). Fifteen hundred years later, in the year Kimyo, King Wu of the Zhou Dynasty enfeoffed Jizi to Joseon, and Dangun moved his capital to Jangdangyeong. Finally, he returned to Asadal and became a mountain god at the age of 1,908.

Dating Dangun’s rule is usually calculated to begin in 2333 BC, based on the description of the Dongguk Tonggam (1485) as the 50th year of the reign of the legendary Chinese Emperor Yao. Other sources vary somewhat, but also put it during Yao’s reign (traditional dates: 2357 BC-2256 BC). Samguk Yusa states Dangun ascended to the throne in the 50th year of Yao’s reign, while Sejong Sillok says the first year and Dongguk Tonggam says the 25th year.

Until 1961, the official South Korean era (for numbering years) was called the Dangi, which began in 2333 BC. Daejong-gyo considered October 3rd in the Korean calendar as Gaecheonjeol (“Festival of the Opening of Heaven”). This day is now a national holiday in the Gregorian calendar, called National Foundation Day.

The earliest recorded version of the Dangun legend appears in the 13th century Samguk Yusa, which cites China’s Book of Wei and Korea’s lost history text Gogi . This is the best known and most studied version, but similar versions are recorded in the Jewang Un-gi by the late Goryeo scholar Yi Seunghyu (1224-1300), as well as the Eungje Siju and Sejong Sillok of the early Joseon dynasty.

Scholars today regard the legend as reflecting the sun-worship and totem ism common in the origin myths of Northeast Asia. The bear is often found in origin myths of Manchuria and Russian Far East. The legend therefore may hint at the relationships among various tribes that worshipped the sun, bear, and tiger.

The story further illustrates the importance of knowledge of weather to the early agriculturalpeoples of Korea. 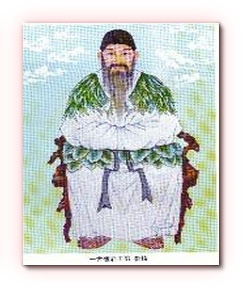 In the 1990s, North Korea claimed it had found and excavated parts of the Mausoleum of Dangun. Scholars outside of North Korea are generally skeptical of the dating methods and the extent of renovations, since the government has not permitted independent access and testing.

Dangun as religion During the Mongol invasions of Korea, the Dangun legend is thought to have played an important role in national unity and patriotic mobilization against the invaders. Gosindo, a version of Korean shamanism that considered Dangun a god, had a small following, but had largely died out by the 15th century.

In the late 19th and early 20th centuries, with a resurgence in Korean nationalism after repeated Japanese invasions and the beginning of Japanese rule (1910-1945), the movement was revived in Daejonggyo. It was promoted by Na Cheol (1864-1916), but could not survive the repression under the occupation (Taejonggyo (1999)/Tangun), since it conflicted with the Japanese cultural assimilation policy. After the surrender of Japan and Korean liberation, Daejonggyo was revived, although it remains a minor religion.

Dangun is the second pattern or tul in the ITF form of the Korean martial art taekwon-do. Students learn that the tul represents “The holy legendary founder of Korea in the year 2333 BC”. Unusually for a tul, all the punches in Dangun are high section (at eye level), symbolising Dangun scaling a mountain.